My name is Luna Silverlion, and this is my Star Stable Online blog. I created this mostly so that I could update you on my horses, pets, club events, YouTube, star stable updates, etc. in a blog like fashion! I love taking photos in Star Stable (and editing) so I figured this would be the best way to show them off, outside of Instagram.

Honestly, I have no idea when I first started playing Star Stable Online as the first time I tried it… I disliked it. I got stuck, the quests weren’t working, so I quit. Then I started watching a few YouTube videos and created my alternate account, Nina Kittensky. She was on Chocolate Cupcake so I made a series of me leveling her (different YouTube channel) until one day, I was like having a deja vu moment and tried to remember what my login was of a previous account. That account was Luna!

Night Star was closed at the time so I was pleasantly surprised to find that Luna was located on the Night Star server and there, I forever stayed. Quickly, I decided to make Luna my main account and bought Lifetime on it. That time has been a whirlwind as I leveled quickly due to my love for questing and made the most amazing friends! When I was on Nina Kittensky, I had zero friends. It was a lonely existence!

November 11, 2017, I decided to move my content to a Star Stable channel and at first, I made it as Nina Kittensky because I thought I would just continue using my Alt for the videos but very soon after, I decided that I was just going to make the channel, Luna Silverlion, and here we are today!

On December 21, 2017, after being in a few clubs on Night Star like Southern Agents, The Presidents Community and Green Rush, I submitted my application to Moon Roses. They quickly became some of my best Star Stable friends as we were a small club. The club had some difficulties growing due to Night Star being closed and very few people remaining that were clubless, but alas, we had a great time!

On March 23, 2018, my dream club came back to life and as I always dreamed of trying to be in The Stars Squad (then known as Pink Stars Squad as the original name was taken after it disband in December by someone on Night Sprinkles), I knew that if they opened applications, I had to apply. Well, they did, and I didn’t apply because I felt I couldn’t leave Moon Roses. When the first applications closed, I was heartbroken and hated that I missed my chance at my dream club. The Stars Squad posted that tryouts were going to be open! I knew that I had to apply because I was for sure that if I didn’t I would never get another opportunity. So, I talked to my friends Dasha Eagleforest and Isabel Ponyfield explaining my conundrum and they told me to go for it. 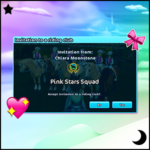 youts went LIVE! The application was posted very late and count my lucky stars, I was awake and saw it on Instagram at the time! So, I quickly pulled up Notes on my iPhone and started typing up my application. I submitted it at 1:00 a.m. March 31, 2018. I was a ball of nerves after they replied that they had seen it. I was super nervous and then, that afternoon, I got a message that I had made it to round 2. I screamed. My cats ran from me. I told Dashy and Cookie, and they were so supportive.

On April 1st, yes on April Fools Day, I received a message from Chiara Moonstone that it was time for my interview on Discord. Now, I am a really shy person (shocking, I know) so I was extremely nervous about this because what if I failed?! I made it so far and I would be devastated! It was so weird hearing the voice of somebody I had only watched on YouTube talking to me, that it made me even more nervous, but I must not have sounded like too much of a weirdo because very

shortly after my interview, they told me I was accepted into the Squad! Best. Day. Ever.

Shortly after that, my two closest friends, Dasha Eagleforest and Isabel Ponyfield, also joined the Squad! After that, tryouts closed and we had our first event, The Baby Shower event on April 7, 2018. On April 26, 2018, our good friend Alexandra Lightningpaw, who had her club Alpha Witches Circle on Night Sprinkles, got the name The Stars Squad back after the club that had it released it. She reserved it and coordinated with owners Chiara Moonstone and Britney Goldside on the timing so we could get it back. Pink Stars Squad was dis-banned and reserved away on an alternate account and The Stars Squad was back to its rightful owners.

The second to last event on my timeline, so far, is on July 3, 2018, there was a Night Star Clubs United event hosted by the Turbo Turtles. During the event, the Squad was told to hang around because they had something to tell us members. After the event, we sat down at a picnic in the Midsummer Festival. They started off sounding so serious that I was actually scared they were going to disband The Stars Squad… however, something I never, ever, EVER, could have dreamed would happen… happened! They named ME, little ol’ me, as the club manager! I was literally so shook that I started crying. Happy tears, of course. I have never felt so blessed and lucky in my whole entire life!

Well, the impossible actually happened on October 23, 2019 when I was asked to be co-owner of The Stars Squad. I will tell you that if you would have asked me 1 1/2 years ago if I could see myself as an owner of this club, it would have been a laugh and a no. I am SO excited to see what the future holds and to help bring the very best of positivity and happiness to Jorvik.

The most recent part of my Star Stable journey, is that I was invited to join the Star Stable Ambassador program on June 4th, 2020! I never, in a million years, thought they would pick me! I am completely honored and humbled to have this opportunity  as I am alongside some amazing people. Thank you to everyone who believed in me, I will not let you down! 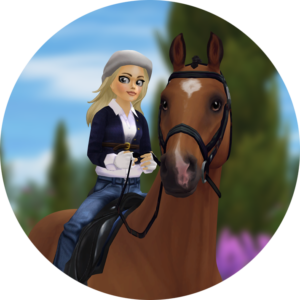 Hi! Thanks for visiting my Star Stable Online blog! What you read here is based on my opinions, and yours may differ, and that is okay! I hope you enjoy your time here and have an excellent rest of your day.

As her name implies, Snow loves snow! She is very

While I am so happy that the snow is back, I had t

I had read quite a few comments regarding the hors

I think my favorite part about horse progression i

So I admit that sometimes, I could be better with

Because I absolutely do not have enough horses alr

I am going to miss the Winter Village when it leav